HMS Tonnant by James Brereton - HMS Tonnant (French language: "Thundering") was an 80-gun ship of the line of the Royal Navy. She had previously been Tonnant of the French Navy and the lead ship of the Tonnant class. The British captured her in August 1793 during the Siege of Toulon but the French recaptured her when the siege was broken in December. Rear-Admiral Horatio Nelson captured her at Aboukir Bay off the coast of Egypt at the Battle of the Nile on 1 August 1798. She was taken into British service as HMS Tonnant. She went on to fight at the Battle of Trafalgar in 1805, during the Napoleonic Wars.

It was aboard HMS Tonnant that the Americans, Colonel John Stuart Skinner and Francis Scott Key, dined with Vice Admiral Cochrane, where they negotiated the release of a prisoner, Dr. William Beanes. After his release, Skinner, Key and Beanes were allowed to return to their own sloop, but were not allowed to return to Baltimore because they had become familiar with the strength and position of British units and knew of the British intention to attack Baltimore. As a result, Key witnessed the bombarding of Fort McHenry and was inspired to write a poem called Defence of Fort M'Henry, later named "The Star Spangled Banner".

Now you can paint this wonderful painting with this amazing paint by numbers kit.

Each Masterpiece By Numbers kit is produced with care and attention to produce a painting as close to the original artwork as possible.

The peace and serenity of painting is time well spent in our hectic world. The joy of painting this expertly detailed canvas will only be matched by the beautiful painting you will create.

Includes Everything You Need To Complete Your Painting:

Click the "Add to Cart" button now. Limited quantities are available so order now if you see a picture that you like. 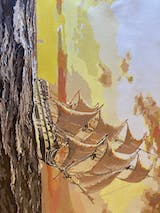 This is the third painting my 89 year old father has done. He loves the vivid color and the challenge it gives him.

Picture was true to the illustration. Easy to complete and enjoyed painting it.

This painting was a lot of fun. I have it hanging on the wall in my living room. Looks great!

This is my 12th painting and I have enjoyed every one of them.